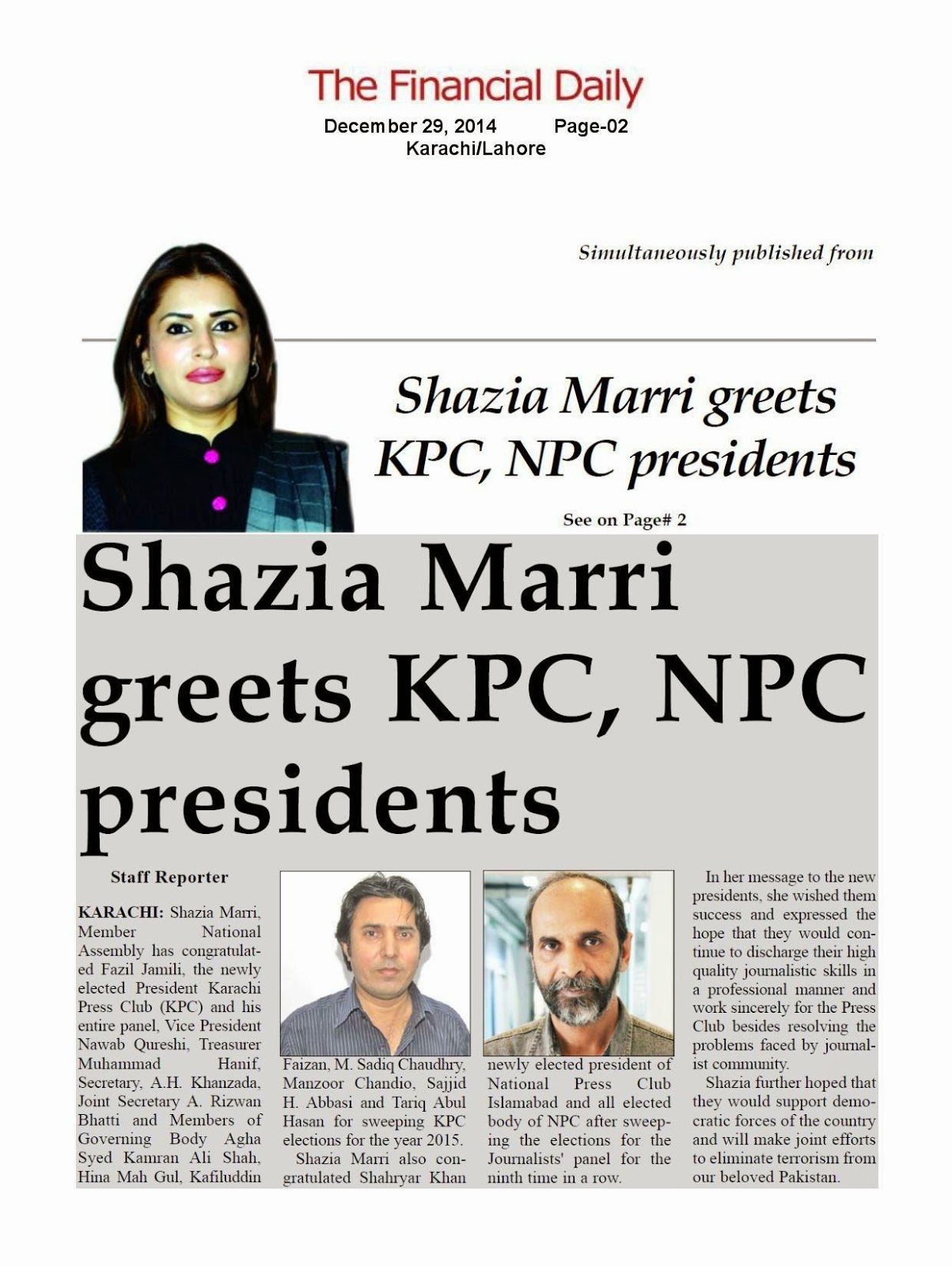 Posted by Chief Editor at 5:22 PM No comments: 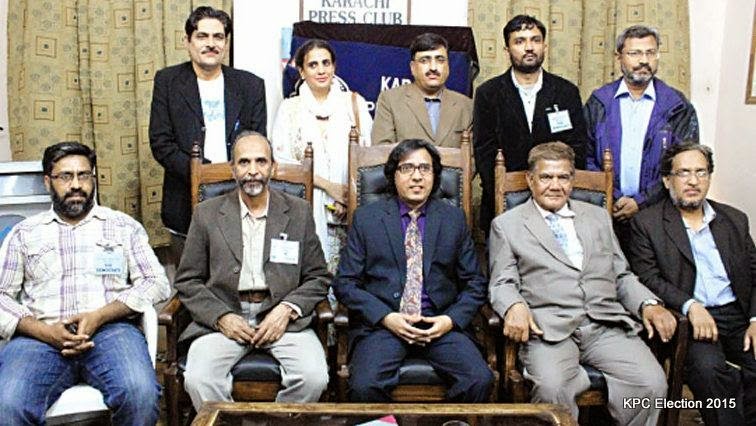 Fazal Jamili and AH Khanzada of the Democrats Panel were respectively elected President and Secretary of the Karachi Press Club (KPC) in the annual elections held on Saturday. The other candidates of the panel, including Nawab Qureshi, Muhammad Hanif and Rizwan Bhatti were respectively elected Vice President, Treasurer and Joint Secretary , while Agha Karam Ali Shah, Hina Mah Gul, Kafeeluddin, Siddiq Chaudhry, Manzoor Chandio, Sajjad Abbasi and Tariq Abul Hasan were elected members of the governing body. Federal Minister for Information, Broadcasting and National Heritage Senator Pervaiz Rashid on Sunday congratulated Fazli Jamili, the newly elected KPC president. He also felicitated Shahryar Khan on his election as President of the National Press Club Islamabad. In his message, the minister also congratulated other office-bearers of the press clubs elected on Saturday. He said the government considered the media an important partner in the development of the country and strengthening democracy in the country. The present democratic government would continue to facilitate media in the performance of their professional obligations, he added.
Posted by Chief Editor at 4:30 PM No comments: 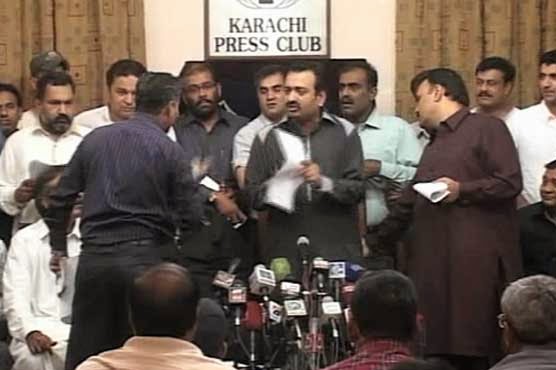 An unruly group of Jang/Geo Group journalists violently disrupted Cable Operators Association of Pakistan's (COAP) press conference here on Friday afternoon, Samaa reported.
According to sources, as soon as the president of COAP, Khalid Aaraeen started speaking to media at Karachi Press Club (KPC) , dozens of angry Jang Group journos attacked him with barbs of all kinds.
This is for the first time in the history of KPC that "freedom of expression" was so brutally strangled by none other than those who claim to be its biggest proponents.
The argument, which started with an exchange of allegations took a turn for the worst at the very outset of the press briefing. "The wild brawl that ensued left the KPC press conference room in an utter mess", said a Samaa TV reporter.
Shattered windowpanes, broken furniture, mangled electronic equipment, torn-down curtains, and other destroyed property of KPC spoke volumes about the 'Sturm und Drang' it saw in a short time.
After wreaking the mayhem, which analysts say was premeditated, Jang Group staffers succeeded in sending the cable operators packing.
Later talking to Samaa TV, Khalid Araeen condemned Jang Group mediamen’s shameful sabotage of their press conference.
“We were manhandled, threatened, and cursed, by the Jang Group journalists”, said he.
To a question, he said that COAP was not expecting such hooliganism for the so-called educated journalists representing Pakistan's largest media group.
“It was absolutely shocking. They just pounced on us like hungry wolves. We were accused of depriving Jang/Geo employees of their livelihood”, said he.
When asked whether Geo TV's transmission will be shut down, he said, "It’s nothing personal; however, we believe in the recently issued 'fatwa' (religious edict), according to which watching Geo TV is a sin."


He further added that cable operators would not propagate anything that was against Islam.
Posted by Chief Editor at 3:57 PM No comments:

New media: ‘If you want to be a journalist, be curious’ 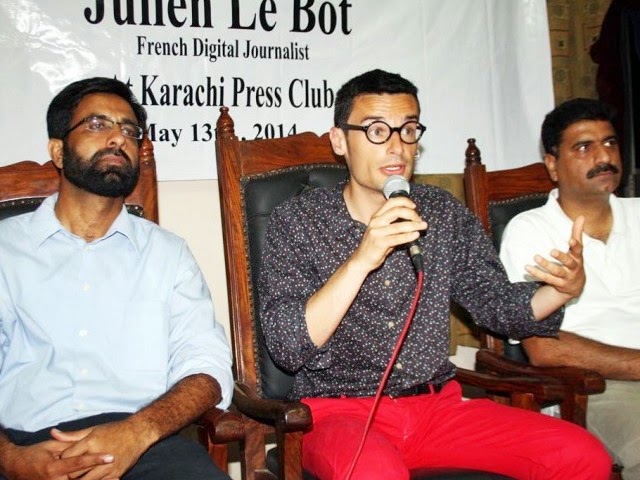 The first step to becoming a journalist, according to French journalist Julien Le Bot, is to be curious.
Le Bot, who primarily works in digital media, believes that philosophers and journalists have similar characteristics. He added that when he was younger, he wanted to be a philosopher but ended up working in journalism.
While talking about the do’s and don’ts of journalism, Le Bot quoted a couplet from French poet, Charles Pierre Baudelaire, to explain the importance of ‘strolling’. He added that journalists don’t just have to be curious but need to be professional strollers as well in order to get the job done.
Long form
The French journalist said that just like any other field of work, journalism, also needs to catch up with new practices.
“In France, the most innovative projects are produced outside the newsrooms,” he said while talking to The Express Tribune. “After holding workshops in Karachi, I have come to realise that the people here have a lot of potential to explore the emerging and challenging avenues of journalism.” He added that along with new practices, the method of story-telling also has to change – take up issues and make them more exciting.
The 33-year-old journalist said that long form journalism was important. “If you have a story, you engage web developers and use tools to make it interactive and work on it just like any other project,” he said. “The pressure in a newsroom is such that it reaches the point of redundancy. This demotivates journalists from their goals and thus to keep the job moving forward, new modes need to adopted.”
While talking about his own career, Le Bot said that he started working for France24, when he was just 23-years-old and then started a media boot camp called 4M Mashriq, for new media startups in Lebanon, Syria, Iraq and Palestine.
His trip to Pakistan made him realise that he can take the camp a step further and bring in more training sessions for young journalists who want to explore new avenues of journalism.
“I left routine journalism because I wanted to be free to do what I wanted to work on,” he said. “I did not want to depend on the agenda of newsrooms.” Le Bot added that social media and online newspapers have more readership than broadcast or print. “In France, it’s only the older lot that watches television,” he said. “The young people are only interested in social media, Twitter, for them is like a newspaper.” He added that it was just a matter of time that the same trends would be followed in Pakistan.
Current projects
His company, Yakwala, which is a phonetically arranged word for ‘what happens is now’ provides services to new media startups, civil society organisations and NGOs for making their projects more relevant and digital.
“When you become an online journalist, the entire world is your audience,” he said. “You are free, independent and more vocal in what you want to do and achieve.” He added that for him every journalist must become an online journalist by starting a blog and following up on tools that tell them about their readership and followers. Meet The Press with Kuldip Nayyar 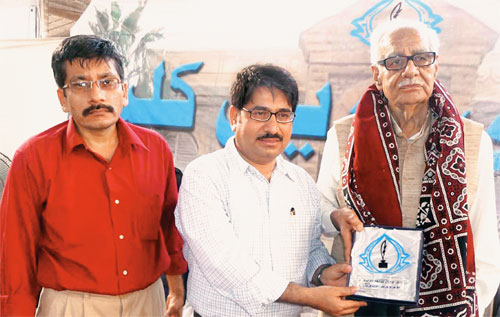 Tahir Hasan Khan, a senior reporter of The News and a candidate of The Democrats panel, was elected president of the Karachi Press Club (KPC) by polling 493 votes as the panel made a clean sweep of the annual elections of the press club on Saturday.
All candidates of the two rival panels — The Panel and The Panel (Green) — were defeated. As many as 996 out of the total 1175 members cast their votes.
According to the results, the first runner-up for the post of president was Khalid Farshori, who bagged 275 votes, and the second runner-up, Khurshid Abbasi, received 203 votes.
The post of vice president went to Fazil Jamili, who polled 561 votes, followed by GM Jamali with 292 and Zaheer Ahmed with 107 votes.
Mohammad Anwer Khan became treasurer by receiving 537 votes. The first runner-up was Ihtishamul Haq Mufti with 279
votes, while Jamshed Gul was the second runner-up with 151votes.
Moosa Kaleem was elected general secretary of the KPC. He polled 521 votes, followed by Faheem Ahmed with 347 votes and Shahid Ghazali with 117 votes.
The slot of joint secretary was won by M Arif Khan, who secured 479 votes. Iqtidar Anwer got 249 votes and Bilquees Jehan polled 211 votes.
The following seven candidates were elected to the Governing Body: Shams Keerio, 560 votes; Arif Jiaja, 557 votes; Shakeel Salawat, 508 votes; Noman Rafiq Khan, 507 votes; Ghazala Fasih, 487 votes; Hamid Nazir, 419 votes; and Syed Shahzad Ali Shah Jillani, 439 votes. (The News)
Posted by Chief Editor at 4:21 PM No comments:

The Karachi Press Club (KPC) (Urdu: انجمن صحافى كراچى), is an association of primarily news journalists, but also includes academics, business people and members of the public service, and is located at Karachi, Sindh, Pakistan. KPC was the first press club of Pakistan. Its first election was held in 1958, I.H. Burney was the first President of the KPC.

Established in December 1958 by a group of enthusiastic journalists in a Victorian style bungalow on what was then the "Ingle Road" and now Sarwar Shaheed Road, KPC has today more than 900 members and plays a vital role in the democratic struggle in general and the struggle for press freedom in particular. The KPC is housed in a double-story building and is a majestic heritage monument. The ground floor comprises the main hall where press conferences and functions with large audiences are held. The upper floor houses a well-stocked library, a committee room, and a TV lounge. There is also ample room for carom board and chess enthusiasts, a card room, and even a small bar.

Last year Karachi Press Club celebrated its golden jubilee. In this connection many programmes were held. The new Governing Body is planning many events in this connection.(wikipedia)